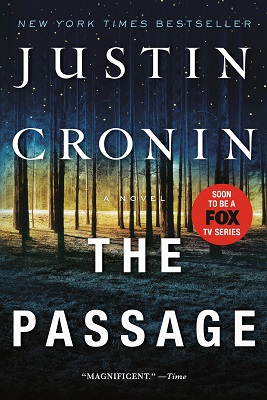 An epic and gripping tale of catastrophe and survival, The Passage is the story of Amy—abandoned by her mother at the age of six, pursued and then imprisoned by the shadowy figures behind a government experiment of apocalyptic proportions.

But Special Agent Brad Wolgast, the lawman sent to track her down, is disarmed by the curiously quiet girl—and risks everything to save her. As the experiment goes nightmarishly wrong, Wolgast secures her escape—but he can’t stop society’s collapse. And as Amy walks alone, across miles and decades, into a future dark with violence and despair, she is filled with the mysterious and terrifying knowledge that only she has the power to save the ruined world.

The time: now. The place: close to home. The outlook: apocalyptic. America is in crisis and under siege. Costly, ill-advised foreign wars have exhausted the military and divided the country. Multiple terrorists have struck at the heart of the homeland. Hurricane Vanessa—far more devastating than its predecessor, Katrina—has reduced New Orleans to a toxic, crime-ridden swamp. The tentacles of a vast state security apparatus now extend into the private lives of every citizen. It is in this atmosphere of fear, suspicion, and unchecked federal power that the government sets into motion Project Noah—a top-secret medical experiment at a Colorado military installation.

Special Agent Brad Wolgast is charged with a mission. His duty: to bring twelve death-row inmates to the Colorado facility where, in exchange for the commutation of their sentences, they will be injected with an experimental virus. That is all he knows. Withheld from him is the dark secret of Project Noah and its author, Jonas Lear. Lear believes that the virus, taken from a rare species of South American bat, is the source of the vampire legend. Through its interaction with the immune system, it has the power to fight virtually all diseases and radically lengthen the human life-span—a matter of great interest to the military, which hopes to use it to create a force of super soldiers. But Lear and his associates get far more then they bargained for. The virus transforms the inmates into twelve monsters of incredible strength and psychic power, hungry for blood. Leading them is Babcock, the first inmate infected, and the viral creature known as Zero, a biochemist who was infected on an expedition to South America and served as the virus’s original carrier. Their breaking free from confinement is a matter not of if but of when.

But there is a thirteenth test subject: a six-year-old girl, named Amy, abandoned by her mother at a Memphis orphanage. At the Colorado compound, she too is injected with the virus, but a more refined variant. Like the death row inmates—known as the Twelve—she acquires a strengthened immune system and extended life-span, but unlike them she remains otherwise unchanged. When the Twelve break free, unleashing death and destruction upon the North American continent, Wolgast rescue Amy and steals her away to the Cascades of Oregon, where the two seek refuge as civilization comes apart.

Thus the stage is set for the world to come.

Nearly a century later, North America is unrecognizable, a wasteland. Forty million infected humans, known as virals, stalk the continent. In a fortified mountain compound in Southern California, a handful of human survivors—descendants of children evacuated from the city of Philadelphia in the last days of the epidemic—somehow carry on. It has been years since the citizens of First Colony have seen anyone from the outside world; as far as they know, they are the last people alive on the continent. But time is running out for them. The life-saving lights that protect the Colony are dimming as the batteries that power them lose their charge. Despair has taken hold; many have given up. Some, gripped by terrifying dreams, have resorted to taking their own lives.

Then, from out the wilderness, someone new appears, a teenage girl. Dirty, traumatized, dressed in rags and apparently unable to speak, she is befriended by a group of four young people—Peter, Alicia, Michael, and Sara—who attempt to unravel the mystery of her origins. A computer chip embedded in her neck reveals part of the story: Her name is Amy, and she is almost a hundred years old. As a political crisis envelops First Colony, the group and a handful of others set out from the protection of the city walls to undertake an odyssey across the viral-infested wasteland. Their destination is the Project Noah site in Colorado—where, they hope, they might learn a way to defeat the virals.

But the way is not easy. In Nevada, they encounter a community of survivors that calls itself the Haven. All seems peaceful, yet the community has neither walls nor lights—no way to protect itself from the virals. The Haven, they quickly come to understand, is a sham, a community of slaves to Babcock, to whom they give blood sacrifice in exchange for their lives. The group escapes, but only after one of its own, the young boy Hightop, is lost.

They continue their journey. Amy has begun to speak; though she remembers nothing of what happened to her in Colorado a hundred years ago, her psychic connection to the virals gives her insights into the things they have seen. In Utah, they come to a farmhouse, surprisingly intact. Two of their number, Theo and Mausami, who are expecting a child, decide to remain. The rest of the group—Amy, Peter, Alicia, Michael, Sara, and Hollis—press on for Colorado.

They are several days shy of their destination when they are ambushed, but not by virals—by soldiers. They are taken to a fortified garrison, where they learn that in Texas a thriving city yet survives. Here is the hope and safety they’ve been looking for. But when the offer is made to evacuate them to Texas, Peter declines. He will ride up the mountain with Amy to the Project Noah compound, just the two of them, to find what awaits them there.

What they find is a snow-buried ruin. All seems lost until Peter and Amy hear a voice—a woman’s voice—singing. It is the voice of Lacey Antoinette Kudoto, the nun who cared for Amy before she was spirited away to Project Noah. Lacey, like Amy, was treated with a modified form of the virus, prolonging her life and giving her a psychic connection to the virals, including Babcock, who is pursuing them with his army of the infected. A showdown looms, but first Lacey gives Peter what he has come to find. Beneath the mountain lies a passage leading to a secret room. There Jonas Lear left behind two things: twelve vials of the virus he used on Amy, and the unfired nuclear weapon that was meant to be detonated if the original test subjects ever broke out of containment.

As Babcock’s army charges up the mountain, the rest of the group rejoins Peter and Amy. With them is Lucius Greer, an officer of the Texas Expeditionary. Lacey successfully lures Babcock into the tunnel and detonates the warhead. Babcock dies, but even more: His army dies as well, thus revealing a way to rid the world of the viral threat. Kill one of the Twelve and all those whom he has infected, who carry his viral line, will die as well.

But in the attack, Alicia is bitten. As she begins to transform into a viral, Peter injects her with the “Amy virus.” Alicia survives, but not unchanged. Though to all appearances human, she is now endowed with all the speed and strength of a viral, making her the perfect weapon to defeat them. Here is their answer. But when Peter volunteers to infect himself, he finds the other vials are gone. Amy has destroyed them. “It would have made you like me,” she explains, “and I couldn’t let that happen.”

The group parts ways again. Sara and Hollis, along with Theo, Mausami, and their newborn son, Caleb, head to Texas. Peter, Amy, Alicia, Michael, and Lucius Greer return to First Colony, to tell their friends and family all they’ve learned. But when they arrive, they find the gates open and unmanned, the lights extinguished.

In a world of danger and chaos, where the last inhabitants of North America face imminent annihilation, Amy and her followers may be the last force to stand between humanity and its demise.

“Cronin’s unguessable plot and appealing characters will seize your heart and mind.”—Parade

“Cronin has given us what could be the best book of the summer. Don’t wait to dive into The Passage.”—USA Today

“Justin Cronin has written a wild, headlong, sweeping extravaganza of a novel. The Passage is the literary equivalent of a unicorn: a bona fide thriller that is sharply written, deeply humane, ablaze with big ideas, and absolutely impossible to put down.” —Jennifer Egan, author of A Visit from the Goon Squad

“Cronin gets it just right; the combination of attentive realism and doomsday stakes makes for a mesmerizing experience.”—Salon

“Read this book and the ordinary world disappears.”—Stephen King, author of Full Dark, No Stars

“Meet what is likely to be one of the biggest blockbusters of the summer.”—People